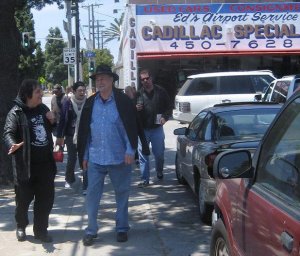 I first heard of Bob Branaman from L.A. performance artist Milo Johnson, who said to the effect that I “had to meet this guy, he knew all the Beats.”  I have to admit to a certain cynicism – such claims of Beat friendship are made by people who might’ve waved at Allen Ginsberg across the room, let alone had a few sentences with him.  My cardinal sin here rebounded in my face like an elastic band with an iron anvil on the end: “Well, how come I don’t know about him if he’s so fucking great?”  Not only do I now stand corrected, but it proved a profound teaching for my own poet’s obscurity dark to the horizon as well.  That Acme Dynamite roadrunner cartoon moment – the whites of my eyes blinking from a sooty, burned carcass in a moment of clarity – if you can’t make this American culture money, accidentally or otherwise, it has no interest in your droning commentaries.  You are a ghost.

Allen Ginsberg wrote his Vietnam poem-critique “Wichita Vortex Sutra” in 1966, itself a collage of conversation and radio snippets from a portable tape recorder Bob Dylan gave him.  Less known is that the term “Wichita Vortex” was a phrase Ginsberg heard from his friends Michael McClure, Bruce Connor, Charles Plymell and Robert Branaman, all who migrated to East and/or West Coast from this strange Kansas center of America.  For the most part, these figures also experimented outside of both poetic and artistic disciplines they were often pigeon-holed in.  Film, collage, stage plays, and photography were exploded through the shifting paradigm of the 1950s/60s Beat phenomenon.

Of all of these artists, Branaman is a seminal (and at the same time, perhaps the most obscure) figure of this period.  Known well by his contemporaries, Branaman’s own wild trajectory from alcoholism and addiction to recovery fused with a near-cursed lack of self-promotional skills shoved him under the radar.  (His good friend, Charles Plymell, suffers a similarly shocking lack of recognition, if for no other reason than his refusal to be his own publicist, even with an astounding novel like Last of the Moccasins.)

Branaman’s numerous contributions and collaborations with William Burroughs, McClure and Ginsberg now seem to be finally getting the 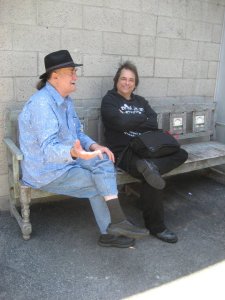 cultural and historical place they deserve, helping to examine the larger multi-media aspect of the Wichita Vortex in its filtering of American mind – deconstructing and reassembling its artifacts in ways that are now part of mainstream media culture.

Enter Bob’s garage in Santa Monica, California for some of these artifacts.  He is still very active in his late 70s, this man Allen Ginsberg called “one of the most exquisite visionary artists in America.”  Bob’s running out of room.  His assemblages are stacked like hubcaps.  His paintings are piled together.  His seriagraphs lie on a work table – you might get one free if he feels like it.  Bob’s energy is exceptionally cheerful.  He practices the Chinese energy work Qi Gong and is a long time practitioner of Arica (Oscar Ichazo’s mystery school – see John Lily’s Center of the Cyclone for a good account) as well as a follower of Garchen Rinpoche, a Tibetan Buddhist master of high regard.  The result: it can be quite giddy to be with Bob, a feeling similar to just arriving in your childhood friend’s back yard.  The potential for fun is limitless.  There is much laughter.  I usually like to go to a little Santa Monica coffee shop with him for breakfast.  It’s his place.  Cheap pancakes, eggs, bacon and coffee.  There will always be a few people coming along.  Bob’s stories begin and they are uniformly hilarious.  He DID virtually know all the Beats – except he once saw Kerouac, drunk, surrounded in a bar and thought Jack wanted to be left alone.  Other than that, he can tell you stories about anyone you bring up.

More of this article at: